I've got several ideas for new polymer directions to explore over the coming months. In the meantime, as I narrow my focus on which technique to tackle next, I decided to turn a critical eye towards some existing designs. Several pieces in my current stash could benefit from a bit of tweaking. Updating. Renewal.

While I've vowed never to put something out there which I don't absolutely love, I've got to admit that my tastes have changed a bit over the last couple of years, as (hopefully) my artistic eye has developed.

This choker is the first such piece to be revamped in 2013. While I loved the original, I now found the cord treatment a bit too busy, and the focal to be sort of bland, despite quite a bit going on. 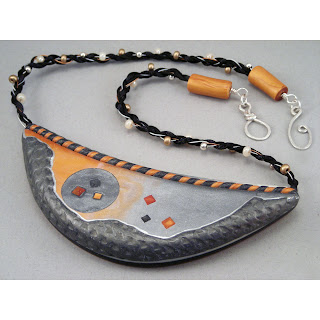 Having discovered some thicker 3mm leather available locally, I decided to try a cleaner, simpler cord material which didn't compete with the polymer focal. And, as for the focal some surface cracking and carving were introduced, and the entire piece was treated to black antiquing. Finally, the lower textured element was covered with a thin layer of lighter silver polymer, then highlighted with metallic mica. 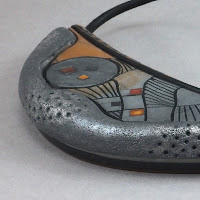 I believe that texture (beyond "smooth" which is also texture) was what was currently lacking, and that the overall design now has a more pleasing balance. 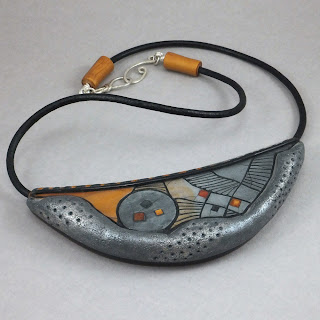